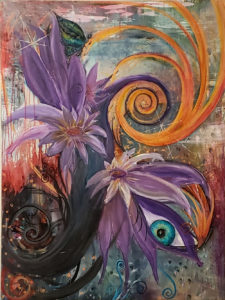 I have been making art for well over a decade.  It started as little sketches in my dream journal, they seemed more efficient and descriptive than words sometimes. Rather than writing, “there was a cross road, plus roads going in many directions, in a city with lots of grey buildings and glass…  My hand was bleeding… I drove directly into the Sun…” , I could draw the road map, color around it with grey pastel, a bleeding hand.  Soon the drawings became more elaborate.  And gradually something began to happen.  As I sketched and colored, the dream seemed to come back to life: the feelings and nuances, small details I might have overlooked reemerged in my awareness.  Because I was not engaged in word-based thought, I could reenter a dream like state.  This had the unforeseen benefit of allowing an extended, open conversation between my conscious self and the unconscious.  Jung had a name for this process: Active Imagination.

It was fortunate that I was unencumbered by any formal art training.  Words like “composition, hue, and perspective” meant little to me.  I was not trying got create a work of art.  In fact, there was no outcome I was seeking.  It was the act of drawing the dream, the state of reverie evoked, the state of aliveness and rightness in the act itself that was the purpose.  I discovered (as many have before me) that there is a conversation between me, the artist, and the art itself.

What if the act of creativity, of art making, was a conversation between you and an unknown, emergent you?  What if you wrote poetry, made photos, drew, painted, sculpted, wrote songs that were just for you to see yourself more fully?  What if there was no audience to evaluate the value or meaning of your work?  What if there was no critic to determine its merit?  What might you do?

This is the world of Process Art.  Here, the experience of creating, the process itself, is in the foreground while the finished product is more background.  Imagine the freedom this offers.

Dream Series: How to Remember Dreams

When I was a teen, I developed curiosity about the functions of dreams. With just…

New Year Resolutions: It isn’t about changing yourself

What if you approached 2013 with a creative spin on the old New Year’s Resolution?…